Well, I broke my streak of posting every day during the month of July yesterday.  It was bound to happen I suppose, and I'm surprised I made it a full 24 days before dropping the ball.  After a few hours spent kayaking on the ocean in the hot sun, I simply didn't have any energy left to muster a post last night.

Let's get right back on the horse though with a Signature Sundays post today.  With Major League Baseball officially back in action now, it only seemed appropriate to show a baseball card for this week's segment.  Here's one that I picked up a couple of years ago that's been waiting for a chance to shine on the blog... 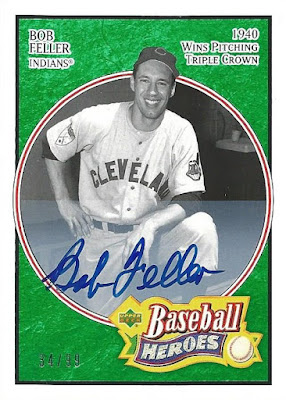 Yes, it's the latest addition to my small collection of these on-card Emerald Autographs from 2005 Upper Deck Baseball Heroes!  I've gone on about my love for these plenty of times in previous posts, but for now I'll just say there are 100 cards in the set, 20 subjects, 5 autographed cards per subject.

This particular card features the great Bob Feller.  Bob was known for signing a ton of cards late in his life, and while that may detract from the monetary value of his signatures, it certainly doesn't detract from the appeal of owning one if you ask me!  Each card highlights an achievement from the subject's career, in this case Feller winning the pitching triple crown back in 1940.  Only eleven pitchers have completed the feat since then, though Koufax and Clemens each achieved it more than once. 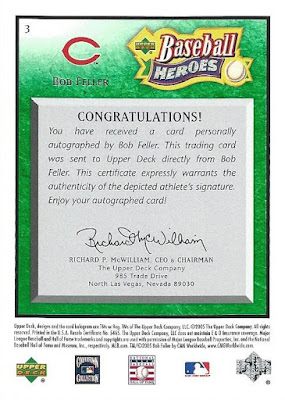 Here's the back, standard congratulations message from Upper Deck.  Other than that, not really much to see here.

I haven't picked any of these up since the batch that included Bob here, back in late 2018.  I'm under no delusion that I'll ever collect all 100 of them, but I have thought about maybe going for at least one card of all 20 subjects in the set maybe.  I'm not really sure yet, so for now I just hang onto any that I acquire out in the wild at a good price.  This Feller is my 19th card as far as these Emerald Autographs go now, not too shabby!

That's all I've got for today.  Just a solid on-card autograph of one of the best pitchers ever to take the mound.  You don't have to take my word for it though, just ask Ted Williams or Stan Musial, both of whom regarded Feller as the best pitcher of his era.  Pretty high praise there.

Thanks as always for stopping by, and I'll be back during the week with more new content and new cardboard.  Enjoy the rest of your Sunday!
Posted by shoeboxlegends at 3:20 PM

Good penmanship for a star.

Awesome autograph. Feller is one of those real American heroes. Gotta admire an all-star pitcher in the prime of his career running to sign up to fight for country. It gives me goosebumps just thinking about how courageous guys like him were.